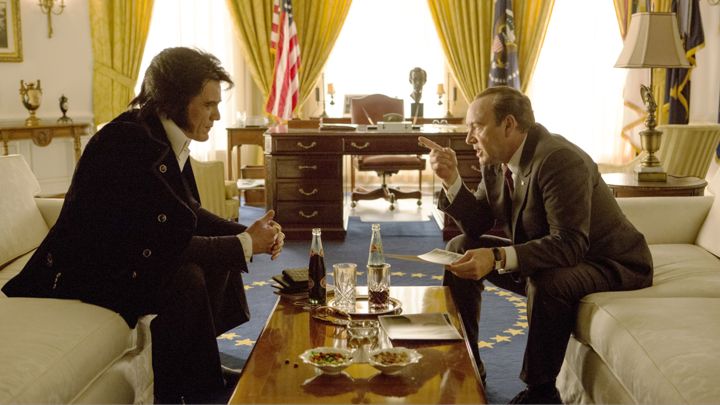 Amongst summer shlockbusters such as Gods of Egypt, Warcraft and Independence Day: Resurgence, Elvis & Nixon is a refreshing slice of Cinema. Directed by Liza Johnson and featuring Michael Shannon, who also starred in Johnson’s ‘Return’ (2011), and Kevin Spacey as Elvis Presley and Richard Nixon respectively. The film was, as stated a stimulating break from this summers trash but was ironically penned by the same guy who wrote infamous shlock classics such as ‘Return of the Swamp Thing’ (1989) and Pamela Anderson’s ‘Barb Wire’ (1996).

This fictional tale, based on the real meeting between the two titular characters is similar to the recent ‘Miles Ahead’ (2016) starring Don Cheadle, both take a larger than life, modern mythological character such as Miles Davis and Elvis Presley and make no attempt to profile them in a down to earth fashion but deliver the legend and rather than be in all of their glory, those days have passed and a jaded, older character is presented. Both show a vulnerable side that longs to escape the objectification that their career has left them reduced to, which has become an almost certain trope in any incarnation of a musical icon in a biopic or otherwise, although, Shannon’s performance is nuanced and empathetic enough to evoke real sympathy for The King. Seeing a tall, gaunt Michael Shannon take on the iconic, full faced Elvis Presley is initially jarring but it is soon apparent that this is a very specific caricature and you soon believe that this is the best version of Elvis for this story, especially when contrasted with Kevin Spacey’s Richard Nixon. Whilst Shannon provides a very specific interpretation of Elvis which is an absolute joy to take in, Spacey absolutely becomes Nixon in true Spacey fashion, down the last line on his face and uncomfortable mannerism, this is Nixon.

The film is in three parts: the first, Elvis decides he wants to become a ‘federal agent at large’, whatever that means, even Nixon isn’t sure. Fuelled by his right wing views on the youth at the time, America’s changing cultural values, drugs and communism, Elvis believes that his rock star status would make him the ultimate undercover agent. The second, he tries to set up a meeting with the president, whom he knows shares similar right-wing views although Elvis doesn’t consider the fact that Nixon has no interest in a meeting with The King or that his far-out request won’t be taken seriously. As a man who had everything, Elvis took to collecting a very specific kind of trinket, police badges. Due to his respect, donations and performances for many branches of the police, he was actually deputised in many states. And the final part, the meeting. The film plays out like a joke, everything sets up for Elvis and Nixon to butt heads and hate each other but in meeting their similarities rise above their differences creating a bizarre friendship which is a joy to watch. Shannon and Spacey’s chemistry is the centrepiece of the film but high credit goes to the suffering assistants on both sides trying to firstly make the meeting happen and secondly ensuring it isn’t the disaster it could be. Nixon’s hapless assistants are played by Colin Hanks as Egil Krogh and Evan Peters as Dwight Chapin, real people indicted in the Watergate scandal along with Nixon. Behind Elvis is his lifelong friend Jerry Schilling, played by Alex Pettyfer, the only person to see Elvis as a person not a thing and living example of the normal life Elvis craves, along with Johnny Knoxville as the freeloading Sonny West.

Elvis & Nixon is a fantastic speculation on the story behind the famous photo which is to this day the most requested photograph in the American National Archives. The casting is tremendous. Both leads are laugh out loud funny at times and heartbreakingly insecure at others. By keeping the tone breezy and the running time only eighty-six minutes, Johnson serves up an engaging and charming film which I look forward to seeing again.